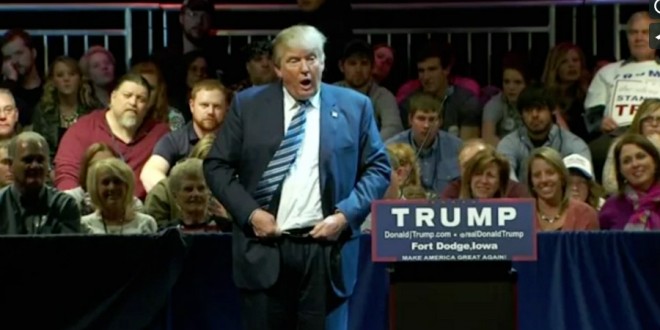 Trump’s Vicious Attack on Ben Carson and the People of Iowa: What It Reveals

“How stupid are the people of Iowa?” That’s the question Republican frontrunner Donald Trump asked Thursday during a rally at Iowa Central Community College. He was referring to their support of Dr. Ben Carson, who now leads in many polls.

“How stupid are the people of the country to believe this crap?” he asked about Dr. Carson’s biography. This coincides with a new Trump spot that calls Carson a “violent criminal” or “pathological liar.” As a bonus, Trump threw in more insults of the press, calling them “scum” and “garbage.”

Many find it interesting and entertaining, but it’s really an opportunity to observe the true character of the candidates and a revelation of the practices and potential impact he or she would have if elected. I suggest that all candidates and citizens carefully read, “The Ten Cannots.” Though often misattributed to Abraham Lincoln, the actual author quoted Lincoln on one side of a pamphlet and wrote his “Ten Cannots” on the other side. Here is the wisdom that Rev. William J. H. Boetcker offered that must be understood and heeded by all, including every candidate and every voter:

We give credit to Donald Trump for understanding and even championing many of these principles, but he has shown this week, and indeed throughout this campaign, that he has utter contempt for the third principle, that “you cannot help little men by tearing down big men.”

Apparently he is absolutely convinced that he can best swell his own reputation by slandering the good reputation of others. There was a time when we might have hoped that Trump’s lapses into mudslinging were mere moments of weakness, and not true markers of his character. But his recent rant against Carson and the entire state of Iowa makes that view difficult, indeed impossible, to maintain.

True character is often revealed most readily not by how we interact with those we agree with, but in how we engage with our opponents. The leader of great character is one who has the ability to forge consensus, to encourage cooperation, and to diffuse the passions of would-be opponents while simultaneously convincing the majority of the most effective approach for success. I think of men like Ronald Reagan and George Washington.

They understood that we do not lift ourselves up by tearing others down. Character assassination brings destruction in the end. Slandering the good people in our way is no way to rise. And a people who fail to recognize this, who cheer the slanderous remark or applaud the bullying shove, they are doomed to be lorded over by a demagogue. May the grace of God preserve us from such an end.

What does Trump’s present assault on Carson reveal? How does calling people “stupid” inspire change or build support? When Trump attacks Dr. Carson’s belief in grace, redemption and the ability to change, how does that build a coalition of cooperation? If Trump points at the press and calls them “scum” and “garbage,” what will he say to other world leaders when they don’t agree on something, and how will that play out?

There have been many elections during my lifetime that were critical to the future of freedom, but this could be the most important election during the 72 years I’ve been alive. Voters must be wise and discerning as they observe what the characteristics of candidates might reveal about their leadership style and effectiveness.

There is no doubt, the 1980 election helped preserve the future of freedom for America and much of the world. At that time, most of the danger came from outside our borders, primarily through the Soviet threat of Communism and the potential for economic collapse. Freedom was preserved because the right leader was put in place by those who understood the importance of a strong leader with a deep commitment to the principles of a free society and the ability to effectively communicate to encourage cooperation.

Today we face a more insidious threat than in that day, and not just from Islamic extremists, both those with meticulous plans and those who lash out at random. The deeper threat is a lack of wisdom and a failure to grasp the essential principles of freedom. It isn’t enough for a leader to talk big and sling mud. Americans must be inspired to work together for the common good, and inspired without compromising the principles of freedom. It is a blessing of freedom to have open dialogue, debate and even heated disagreement. We don’t need a bully on the right trying to intimidate and silence those he disagrees with any more than we need bullies on the far left silencing dialogue on our college campuses.

As a minister and church leader, I do not endorse a candidate or party. I encourage this practice among all ministers, pastors, priests and churches. I do endorse and seek to exalt proven principles and ideas while exposing policies and practices that are ineffective, unsustainable and out of sync with nature’s God and nature’s law. I encourage everyone to lift up all candidates to God, while asking for discernment concerning who would be best to support through prayer, and in the voting booth. We must find the most qualified leaders in every race, locally and nationally. We need leaders who will show us a better way and inspire change that makes us better people. That’s how we become a better nation.

Previous Go To The Stream Today
Next The Fallout From Paris