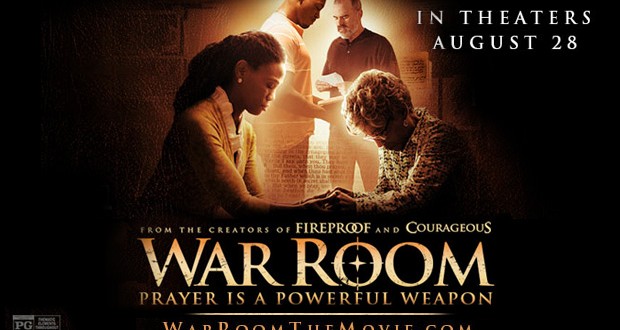 It’s not often you go to a movie you enjoy so much and are so excited about that you wish everyone would see it. It is not because the movie is merely entertaining, but because it delivers a powerful, important message. A new film called “The War Room” presents truth about life, family, personal relationships, liberty, and freedom in such a way that discerning people will recognize it. The fact is, it presents the hope and help everyone longs for. Individuals are facing serious challenges and many are defeated. Marriage and family are under attack. Important principles are being cast aside and we face the very real possibility of losing the precious freedom we have been blessed to enjoy in America.

The Kendrick brothers, who brought us “Fireproof” and “Courageous,” unapologetically deliver a message of spiritual importance and significance dealing effectively with the realm of the supernatural and how it affects every one of us. It is indeed about war; not just any war, but the real war in the invisible realm which affects everything in the visible realm. It inspires people to understand how to fight the real fight with the right enemy in the right way and win! If viewers will recognize the very real and transformative power that this movie reveals, we could in fact witness the next great awakening. It is not a movie about mere religion, but what can happen when those who profess to believe begin to engage in the supernatural.

The lead actress, Priscilla Shirer, has been our guest on LIFE Today many times. She is the daughter of one of my very good friends, Dr. Tony Evans of the Urban Renewal and Oak Cliff Bible Fellowship. Her performance was captivating. All of the actors and actresses were cast perfectly for their roles. It is obvious to sensitive people that the real impact performer was Karen Abercrombie who portrays Miss Clara, the one who explains “The War Room” and its strategic power. In my opinion, she played her role as effectively as the Academy Award-winning actress Jessica Tandy in the movie “Driving Miss Daisy.”

You will find yourself laughing, weeping, excited, and inspired to the point of cheering. The spontaneous crowd response at the screening Betty and I attended demonstrated the powerful effect the movie had. Don’t write this one off as “just another faith-based movie.” This is reality up close and personal. It presents the truth, the whole truth, and nothing but the truth. The filmmakers are to be commended and thanked along with all who supported and encouraged them in their worthy goals.

“The War Room” opens in theatres nationwide on Friday, August 28. Watch the trailer at warroomthemovie.com, and buy a block of tickets. Encourage your church leadership to fill every theatre in America. Then take the message and apply the truth shared and you may just see your hopes and dreams revived and fulfilled because of the power of prayer so clearly revealed in such great simplicity and honesty. Now is the time to “arise and shine with the glory of God on His people” for the benefit of everyone in the world the Father loves so deeply.

Learn how to get a preview of the movie with your church family and friends and how you can bring it to your city at http://warroomthemovie.com/groups.

Also, don’t miss my column on the current Planned Parenthood controversy: Why We Must Defend Life, Even in the Hard Cases.

Previous America and the Terrifying Expectation of Judgment
Next Reject The Lies, Seek The Truth